Under the title Metagénesix is presented a sample of the New Architecture done in Galicia. In this time of fears and instability, appears a new ‘altered’ and ‘alternated’ generation, mostly educated in Galicia, who generates a great optimism for the quality and quantity of their works.

Owing to the Galician architecture communication inactivity, it becomes even more necessary this spreading project, to put in value the work done by the new architects; Metagénesix has, as foregoing Olladas de Perto that have taken place at ETSA da Coruña during the last 5 years, materialise the tentative of leaving the academic context and reaching the society as consumer and user of architecture.

In the current context of financial and social crisis, where the media architecture of recent years is put at stake, where the ‘show’, the ‘superfluous’ predominated, and that provoked an expansion of the existent gap between architect and society, it comes to the surface another way to understand and project architecture. A proximity architecture that assumes the typical limitations of the time, place, job, the developer’s concerns to transform them into opportunities.
Opportunities that appear from the local, not forgetting the global reality of which they are part of, and from which they intellectually nourish. It is added to this knowledge the inherited cultural experience, shaping professionally the new Galician architecture.

The exhibition collects 20 works from 10 architects/teams selected from an open competition, where more than 200 works were presented. Due to the quantity and quality of the proposals it was decided to extend the Metagénesix project, with the support of the Librería Formatos cultural programme, to give voice to another 20 architects/teams grouped in subject talks (Opportunities, Housing+, Non-residential Space, Rehabilitation, Attention Spaces) presented their works in the bookshop during the 2011 competition.

— Trespes Arquitectos
Team formed by Carlos Mosquera del Palacio, Alberte Pérez Rodríguez and Enrique Iglesias Lima. They understand the job of an architect in a transversal way, from the strictly professional to the cultural spreading. Their work has been recognized being finalists at the V ENOR awards and being selected for an ARQUIA/Próxima 2010 award. They coordinate since 2008 the spreading of the cultural programme INTEMCIOM of the bookshop Libreria Formatos in Coruña.

— Felipe Trillo
Architect from ETSAC since 2007, specialized in Urban Architecture, although with a transversal carrier path, from Architecture to Multidisciplinary Design. Collaborator in the 2007-09 Simula Research Proyect, Dep.de Urbanismo y Proyectos, ETSAC, Universidade da Coruña (UDC). Collaborator in the cultural programme Intemcion and finalist at the XIV Premios COAG de Arquitectura and Arquitectura Plus 2011 awards.

— Ana Amado
Architect from ETSAC 2004. Master in Contemporary Art, Museology and Critic from USC. Posgraduated in Creative Illustration from Escuela Eina de Barcelona. Photography training from Escuelas IDEP and LENS. She develops her professional career in architecture as well as in photograpy, mostly architectural, illustration, music, and organizer of exhibitions. She was Finalist at the XIV Premios COAG de Arquitectura and Arquitectura Plus 2011 awards. 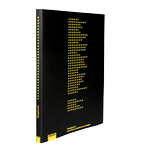